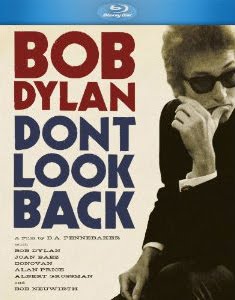 D A Pennebaker’s classic film, Dont Look Back, is now available in a new high-definition transfer on Blu-Ray with lossless DTS-HD audio.

“The image is reasonably well defined and in the outdoor and brightly lit sequences, it looks rather good, considering its 16mm source elements and its age…Much better is the excellent DTS-HD Master Audio 2.0 mix. What’s great about this lossless track is its excellent fidelity in reproducing some wonderful early Dylan performances. There’s a rather surprising lack of hiss and tinniness in any of these performances…Dylan’s guitar rings out loud and clear and his voice also sounds clear and well defined…it’s a really well done lossless reproduction of a vintage track that is most likely going to delight most Dylan fans…4 1/2 out of 5 stars.” – Jeffrey Kauffman, Blu-Ray.com

Dont Look Back has “gotten better as a home-video experience, compliments of its new high-def format…4 out of 4 stars.” – Mike Scott, The Times-Picayune

“Dont Look Back is beautiful because of its unpolished feel. Blu-ray is exceptionally good at making film look like film, and it definitely does here…The 2.0 DTS-HD Master Audio is just as raw, immediate, and impressive.” – DVD Verdict

“Seminal. Not only cemented the musician’s status as an icon of sixties cool; it’s also a crash course in the breathtaking immediacy of vérité filmmaking.” – New York magazine

“If the art of being cool could be learned from a film, then the only one you’d ever need to study would be Dont Look Back.” – Angela Ashman, The Village Voice

“Evokes the 60s like few other documents; Dylan’s relentless heaping of scorn on the mainstream press, before the coercive tentacles of ‘creative management’ made such things virtually impossible, is especially telling… Memorable for its goofy, syncopated opening sequence alone.” – Jonathan Rosenbaum, Chicago Reader

“An unforgettable all-access pass behind the scenes of Bob Dylan’s ’65 British tour, D.A. Pennebaker’s landmark 1967 rock doc all but invented the form while presaging the music video… The concert footage of the young Dylan in his punky prime is electrifying, but the most fun comes from the privileged glimpses of his sadistic wit.” – Jim Ridley, The Village Voice