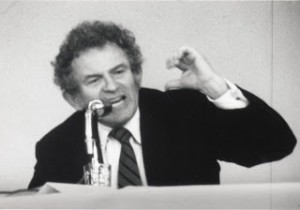 The first time I met Norman Mailer – really met and talked with him – was in the mid-60s in a bar just across from the Theater de Lys, where a dramatized version of his DEER PARK was in rehearsals. With him at the bar were two fierce-looking fellows; one had a familiar sort of face, and the other looked like a bodyguard. The three of them were inventing or rehearsing some kind of a dramatic exchange which I thought might be part of Norman’s book-turned-play. But, having read the book, I quickly realized it was not that. The three were yelling and threatening one another like hoodlums in a street brawl, with only myself and a deserted morning bar for an audience.

I had gotten a call to meet Mailer here, but had not been told why. My partner, Ricky Leacock, had been a classmate of Norman’s at Harvard and we’d run into Mailer at film showings but I don’t think I’d ever been introduced before. Why Norman would call me was a mystery; I didn’t think he even knew my name. And the fracas taking place at the bar before me was even more of a mystery. Was he casting something?

Suddenly, Mailer stopped shouting and turned to look at me. I waited for him to speak, since I was a little confused and not exactly sure what I was doing here.

He introduced me to his two companions, Mickey Knox (an actor) and Buzz Farber, who was almost always at Mailer’s side.

Then Norman asked if I wanted a drink. It was still early, but I said, “Yeah. A beer.”

Well, Norman, Mickey and Buzz all appeared to be completely normal, with no hint of the wild tumult I’d walked in on just moments before. So I was handed a beer and Norman lounged back on his stool and spoke.

“We’ve been doing this thing you just saw a lot recently. We go into bars and do fights or wild conversations and let whatever happens, happen. You can see it’s brutal but when we get it right it’s going someplace. We’re the Gallo Brothers now. We’ve been hiding out.”

The real Gallo Brothers had been in the news a lot recently. I recalled them being involved in the Colombo crime family struggles. The thing that was strange about Norman, Buzz, and Mickey’s rendition was that they had not been talking in any particular accent or style. They didn’t try to sound like members of an Italian crime family. They weren’t enacting characters,they were just putting themselves into a made-up fantasy situation and running with it.

Norman leaned towards me.

“What I want to do is film it. I want to make a movie about it and I don’t need a script, just a mic to catch what we say and a camera to see what happens. But there’s no director, just a camera. And me.” He paused. “I hear you and Ricky make films like that, about things that happen. You have cameras and tape recorders and you just film things. Is that right?”

“I hear one of your films is playing in a theater, yes?”

“Well, what do you think?” He got off his stool and began moving around, like a prizefighter walking around a ring. “We’re going to be these three guys hiding out in Brooklyn and what we do all day is ride each other and maybe drink some. I don’t know about drinking; we’ll have to figure that out. But we need some kind of room, or maybe a loft, to do it in. Can you get that?”

This was actually an idea Ricky and I had been thinking about for awhile. A narrative (fiction) film but shot the way we were shooting documentaries: no tripods, no lights, just handheld cameras, and no directors – or at least, no one directing the camera except the cameraman, and he would be filming whatever interested him, not necessarily sure how the action was going or the story was playing out.

So I said I could, and we did.

That was how the whole film thing with Norman began. Three guys playing they were the Gallo Brothers in one of our empty office on 45th Street, with Bobby Neuwirth taking sound (which, in that echoey, empty room, was not too hot) and me watching Norman and his two friends for hours while they played at being ex-members of the Colombo family – who, had they known what was going on might easily have either joined in the party or maybe blown us out of the water. Who knew or cared about the Colombo crime family? We were inventing movies.

When exhaustion determined the film’s ending, Norman came over to the camera and did something which I will never forget, something that bonded us as long as we knew each other. It remains my most vivid memory o f him. He faced up to the front of the camera and began turning around so that to keep him in the finder I had to go around with him. And as he turned he began reciting a poem, not a poem I knew but a poem he was making up as he went ’round, a poem made up like the movie we’d just shot. It was the first time I had ever filmed someone making up a poem in front of me. It was an amazing place to be with a camera and it’s how I will always remember Norman.